Last week, we were in Albania. This week, we are going to…

Republic of Mali is a landlocked country in West Africa located next to Algeria, Niger, Burkina Faso, and Guinea.

Even though Mali is the third largest producers of gold in Africa, most of the country’s population lives below the international poverty lines of $1.25 US a day. In today’s standards, this isn’t your typical touristy country, but for those that seek a different experience…

If you are going to Mali, please travel with caution. As of October 25, 2014, the first case of Ebola death in Mali has been confirmed. The victim was a child (girl) whose mother passed away, also from Ebola, in Guinea. After that, she travelled (presumably with a relative?) more than 600 miles (1,000 km) from Guinea to Mali via public bus while she was showing symptoms of Ebola. It’s such a sad fate for the little girl and for those that came in contact with her as this disease has reached epidemic level in Central Africa, and due to not being detected in some cases, this has also crossed international borders. Many other countries in Central Africa that have not been affected yet has since sealed their borders to prevent the disease from spreading due to fear that they may also have an epidemic on their hands.

It wasn’t always this way…

“Present-day Mali was once part of three West African empires that controlled trans-Saharan trade: the Ghana Empire, the Mali Empire (for which Mali is named), and the Songhai Empire. During its golden age, there was a flourishing of mathematics, astronomy, literature, and art. At its peak in 1300, the Mali Empire covered an area about twice the size of modern-day France, and stretched to the west coast of Africa. In the late 19th century, during the Scramble for Africa, France seized control of Mali, making it a part of French Sudan. French Sudan (then known as the Sudanese Republic) joined with Senegal in 1959, achieving independence in 1960 as the Mali Federation. Shortly thereafter, following Senegal’s withdrawal from the federation, the Sudanese Republic declared itself the independent Republic of Mali. After a long period of one-party rule, a 1991 coup led to the writing of a new constitution and the establishment of Mali as a democratic, multi-party state.”

I am sure many of you have heard of Timbuktu, a world heritage site. 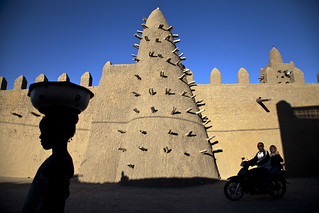 Timbuktu is located in Mali near the Sahara desert. Perhaps better times is coming back to Mali after so many years of conflict.

Just a few days ago, The Guardian publishes an article saying that Timbuktu may be the site of a University.

“Architect’s drawings of Timbuktu university show a design in the shape of a snowflake, with roads radiating outwards from a central hub. The campus would be sited away from the town on the road between Timbuktu and Kabara, the historic trading port on the river Niger where goods were transferred from camel to canoe, and will contain a library and large central auditorium as well as lecture theatres and accommodation.

According to Mali’s minister of culture, N’Diaye Ramatoulaye Diallo, the proposed Timbuktu university will offer courses covering everything from literature to farming to renewable energy.”

I hope this project goes forward. And my hope is that women will get a fair chance at this University. I think by raising the standard of education for all, the country of Mali will be better for it. And while at it, maybe they can emphasize on health care as Central Africa really need to educate their poorer, more rural area citizens on modern-day health care.

Being that every culture is interested in food. I want to know what Malian people eat.

Fufu is made of Cassava flour (Cassava was introduced to Mali by Brazil). Or it may also be made from yam or plantain. Malians’ staple diet is consisted of fufu. Like Ambuyat in Brunei culture (covered by my Brunei post), Malians relies on Fufu and eats it in small balls rolled by their fingers and after dipping into a sauce. Other western African countries also eat Fufu but may call it by another name.

Jollof rice is “one pot” rice consisted of rice, tomato/tomato paste, onion, salt, spices and can be eaten alone or with fish or meats. Other western African countries also eat Jollof.

Maafe is groundnut stew. According to wiki, “a very similar dish of stewed oxtail called Kare-kare is found in the Philippines.” Just thinking about this dish makes my mouth water. I went and searched for a recipe and found this Chicken and Vegetables Braised in Peanut Sauce from epicurious.com. I may just make this for dinner this weekend. YUM.

Have you visited Mali? Timbuktu? Ate Maafe, Jollof rice, or fufu? Share your thoughts and posts with us by commenting, linking, and liking this post and my other posts.

That’s it for today. We hope you enjoy your virtual trip to Mali. I certainly learned a lot about Mali while researching for this short post. Please stay with us and we will virtual travel again next week as we go to another place.

Want to get your photo featured here about Mali, Albania, and/or Brunei? Or any country I may be writing about next? Simply send me a link or attached photo (jpeg preferred) with your original work, give me permission, and I will work with you to feature it here some time in the future. I do reserve the right to refuse entries that I feel may not be appropriate with my blog audience. Thank you.

Would you like to guess where I will be virtual traveling next?

Comment below and we will see whether you are right. 🙂