Some people travel by immersing themselves into the local culture. These days we seem to travel by fulfilling our gastronomical desires. Some travel to faraway places to see magnificent sites (we would love to do that too), we travel to Portland to eat at food trucks. So many trucks, which one do we choose, and where do we begin?

We definitely dived into the local food culture in Portland by sampling all foods that look and smell good. Here are just a few food trucks that we tried recently. More food trucks, restaurant dining, and photos of places in later posts.

One chilly morning, we embarked on this particular food truck, and ordered two very satisfying dishes. Bravely we sank our teeth into delicious chimney bread and mici sausage. Chimney bread was soft and sweetly delicious spiraling out like a ribbon. You can buy the chimney bread with toppings on it like cinnamon, but this was our first time trying the bread, so we opted for traditional, and to our surprise, it was sweet! They baked their bread with a sugar glaze on top.

The mici sausage, however, was savory and served with salty french fries. It was piping hot and dare I say redundantly, so  delicious! While I am not sure if garlic was used in the preparation of the meals, or hung nearby to ward off…hm…competition, we think it’s fair to say that Delicios Taste of Transylvania ranks pretty high on our food truck experience in Portland. If you haven’t already, go and try them out. 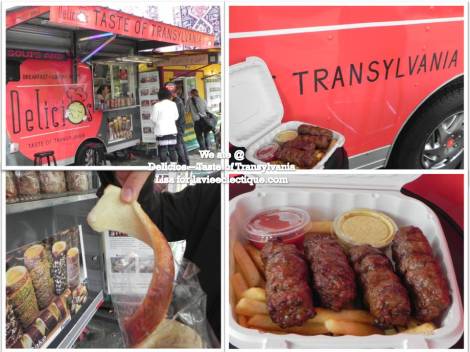 We like the food truck (cart) scene so much that we decided to eat there again during lunch. I forgot what we did in between breakfast and lunch, but obviously it wasn’t very memorable. Lol.

We like witty food truck names, so when we ventured upon one that’s called, The Dump Truck, we had to sample what they are about. Turns out, they serve dumplings. While we like the creative flare of the name, and the story of how this food truck came to be, regrettably, we are not fond of their dumplings. And I love dumplings. How sad. 😦  Let me explain why I found these not the best we had. The skin of the dumplings were way too thick and when you bite into the dumplings, it was not juicy. I know it’s a bit harsh, but…maybe we had a bad batch? I would say if you have an adventurous spirit and like dumplings (who doesn’t, right?), go try them out and form your own opinion. 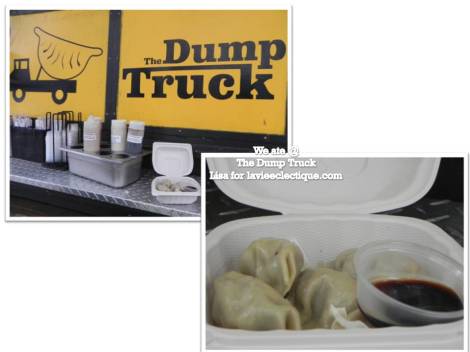 Not filled by dumplings, but they definitely whet our appetite to eat more food, we happened upon Sawasdee Thai. While everyone mostly think of Pad Thai when they go to a Thai place, I am partial to Pad See Ew. A dish consisted of flat rice noodle pan-fried with veggies, egg, with or without protein, and soy sauce. It’s become a bit of a comfort dish for me when I crave Thai noodle dishes. I have no idea why, but I insisted on ordering this to share. 🙂 The dish was hot, filling, and very tasty.

We saw Satay Indonesia next door, so we went over and tried out 3 skewers. Chicken, pork, and tempeh. Chicken was delicious, pork was ok, and hm, the tempeh, was not good. I was the one insisting to try it and I was so disappointed. We did like the little cucumber salad that came with the skewers. Not a bad place to grab some food, but maybe skip the tempeh.

Our waistline definitely expanded after all the eating (and now the posting), so more walking is in order. See you next post and have a safe and happy week!