It took me a while to write this because I was debating on whether I should even write about this place, but in the end, I will write about it because it needs to be written. Chapeau! came highly recommended to us by my friends Nia and Nick, and it came highly recommended to them via another set of friends from high school, etc. To top that off, I invited my friends from college to go there to celebrate multiple occasions one night earlier this month, and some of them know more people who also recommended this place. So you see, it is a chain reaction because I know a few people who frequent this place, I want to make sure that I am really doing the right thing. And the right thing I have decided is to tell it like it was. Shesh, the way I am looking at it, this place is almost like the six degree of Kevin Bacon except that it’s not. Lol.

I dined at Chapeau! twice this year. First, it was a dinner with G and a second dinner with my college buddies. According to the restaurant, Chapeau! is spelled with the “!” in it because it means “Wow!” in french. Without the exclamation point, it means, “hat” and the entire theme of the restaurant is built on this Chapeau and Chapeau! So it’s quite clever.

Good Food – Mostly impressive. Food was the highlight of both dining experiences.

Dinner #1 – Not bad. We had a rather romantic dinner here and really kept to ourselves. We sat at the corner and the tables were kind of tight, so even though we were keeping to ourselves, we really are breaking bread with our neighbors. For example, I found out that the woman who was sitting slightly across from me is a lawyer at a non-profit and her husband and her like to watch basketball on the weekends and they also recently drove to a vineyard somewhere in Paso Robles, etc.  And other details and I wasn’t even trying to eavesdrop. God knows what she and her hubby heard us talk about. Don’t even want to know. Lol. Overall – No complaints for this first dinner.

Here are some pictures of our food from our first dinner. 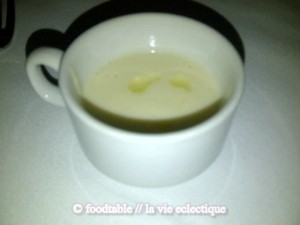 Complimentary - Cauliflower purée with a drizzle of truffle oil 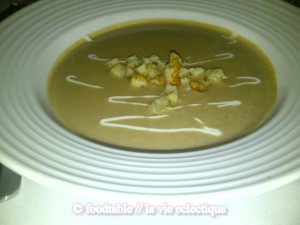 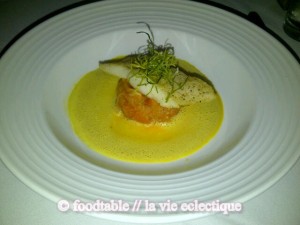 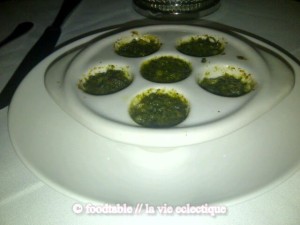 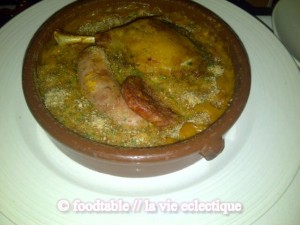 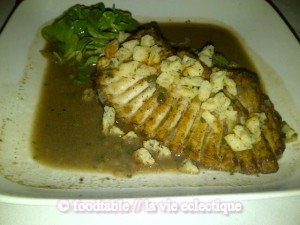 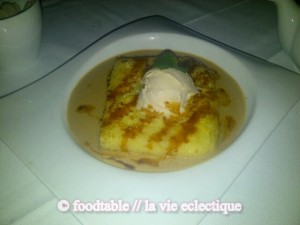 Dinner #2 – I may be overly sensitive here, but I thought the service on the second dinner was less than stellar. Our waiter on this second dinner was nice enough. One of our friends brought a really nice bubbly and the waiter got it all iced in a bucket. So it was really great and the mood very celebratory (we were celebrating everyone’s accomplishments over the course of last year and doing a belated holiday celebration!) Thanks Ms. E for the bubbly! 🙂

The Rude Surprise: Then during our first course of dinner, out of nowhere, this woman (not our waiter) who doesn’t dress like she even work there (*more on this later*), schlep some complimentary soup over to us — surprised me when she happened on us while we were talking excitedly about my friend’s recent trip to Thailand, China, and Russia and she rudely interrupted by saying, “EXCUSE ME!” in a very rude and reprimanding tone.

What was I doing at that point? I was admiring the really cute (and really pink) pillow case that my friend Ms. C (Merci beaucoup!) brought me. Anyway, not expecting that at all, I didn’t say anything. Since she stood on my side, I have a feeling, she was addressing me. In retrospect, I should have said, “And you are excuse!” Wouldn’t that be a hoot? Why do I always think of smart retorts like that when I am not there anymore? Anyhoo- sure I may be doing something improper (Is admiring friend’s gifts at a celebratory dinner improper?), but I don’t think anyone should be so rude. A nice tone would be appreciated. To digress a bit (or digressing a lot), after that dinner, I went on a local review site to see what others said about this restaurant and lo and behold — along with reviews for good food, I also found a few other people commenting on this particular woman’s rude behavior. I wonder what got on her nerve since we (or I) didn’t do anything to provoke her at all and are actually patronizing the restaurant and spending money there. So I think the rudeness is uncalled for.

When I mentioned this to G just now to let him know that I am writing this *little* snippet in, he was like, “oh, you mean THAT woman?”

Surprised, I said, “Why? How did you know? Did you noticed something I didn’t see the first time we were there?”

“Yeah, the woman didn’t fit in because she was wearing these really casual clothes – plaid shirt and jeans – none of the staff was wearing that and honestly, I thought she was a customer. Oh, by the way, what word do you use when a woman’s shirt doesn’t quite close all the way and is looking — well, not cute at all,  but like the buttons are about to pop off?”

To be honest, by this time, I was very amused and I said, “Hm, I think I would say – ill-fitting?”

The Chef was nice though. Upon sitting, he greeted everyone with handshakes and upon leaving, he double kisses you on the cheek. (We didn’t get the double kiss on our first dinner but that’s okay.) Something we don’t expect from most restaurants, but it was nice.

However, the rudeness did get to me. So much so that I am writing about it now. (My apologies to my dear readers!) I didn’t think much about it then, but that incident did mar the other more magical aspects of the evening for me because I am talking more about this rude woman than my friends now!

And really, the evening was supposed to be SOLELY about my friends and maybe the food. Definitely something I will keep in mind when people ask me to recommend restaurants for special occasions because special events are supposed to be special and I certainly don’t want to recommend a place that subjects them to rude behaviors. Even if I do recommend this place because of the food (and it was good!), I would do so with something of a  “Carpe Diem” warning them about that rude woman, like I am doing now. Had that happened on the first dinner, you can be sure I would not have suggested it for the second dinner.

Despite that, my college buddies, Ms. E, Ms. C, and Mr. M and I had an awesome time catching-up. It was so nice to see them. 🙂  One last shout out. Mr. M, thanks for the chic scarf! Wearing it all the time. You rock and I thank you! 🙂

Here are some pictures from our second dinner. I didn’t take pictures again of food that I have already had at my first dinner to avoid duplicates. 🙂 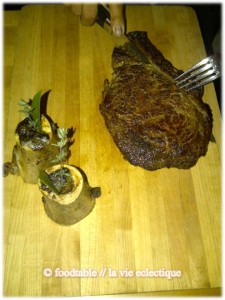 Waiter cutting the Prime Rib for 2 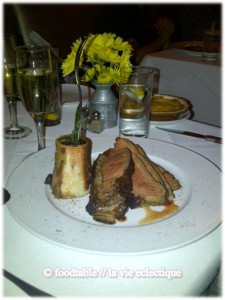 Prime Rib with the bone marrow 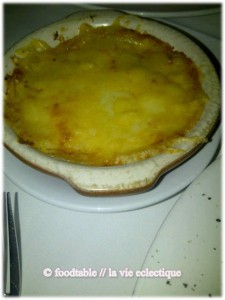 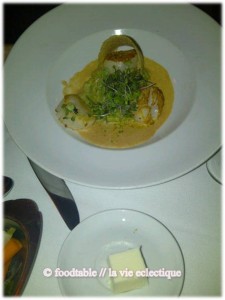 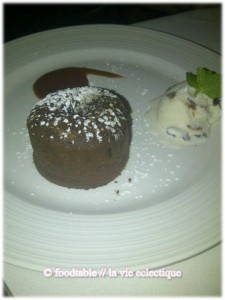 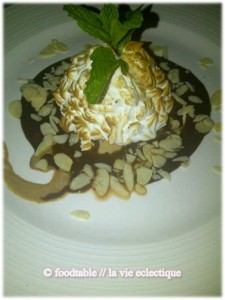 14 responses to “Chapeau!: Good food but less than stellar service”