I am in Montreal, Canada.

After not eating anything except nuts and bars for almost an entire day, I was famished by the time I got to Montreal.  So I ate at a restaurant near the hotel.  I also opted for comfort food.  Well, at least I thought I opted for comfort food until I realized its super fancy Chinese food.  Coming from San Francisco and used to having divvy Chinese places, this is quite a change. Not to mention the entire menu is in en francais.

I don’t think I ordered too shabbily though.  I had the “yang chow” fried rice and the “Sichuan calamari” even though I normally don’t eat fried rice from restaurants.  I guess I just picked something I can actually read in french. 😛

The food is okay, but the service is good.  No chopstick in sight though. Makes me wonder if this is indeed a Chinese restaurant.  Anyway…here’s a picture of it. 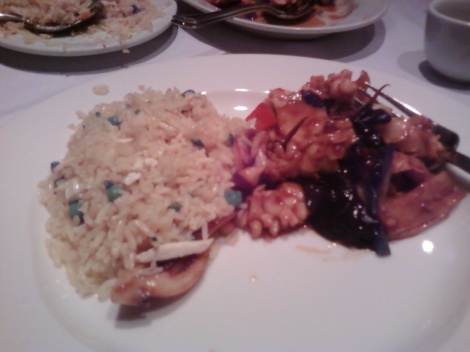