On Let’s Be Frank’s website, they claim that their “primary goal is crafting authentic franks that remind people how delicious a “dog gone good” can be: snappy, juicy, and bursting with flavor.”

Armed with a Groupon for Let’s Be Frank ($12 for 3/12-oz. packages of franks…a $22 value according to Groupon), G and I took a leisurely walk up and down some famous San Francisco hills, and ended up at Let’s Be Frank just in time to try a few dogs and claim our 3 packages.

Walked in and instant score! Package was ready packed and waiting.  Woohoo!

Cooked to order.  G and I were devouring it in a very uncivilized way within minutes. Yum!  But G’s not into veggie dog much although he did say that this one’s pretty good.  So he went back to the counter and got the Frank Dog.  He thought it tasted good but he felt that it’s missing something (probably the preservatives).  He also tried their devil sauce but wasn’t impressed.  I tasted it too and it was just okay sauce to me…not that crazy about it. But their hot dogs were pretty good!  We definitely like it enough to come back…

For now, this is a wrap at 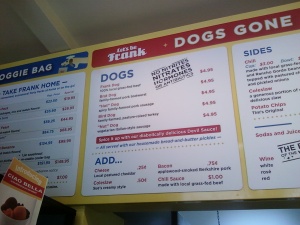 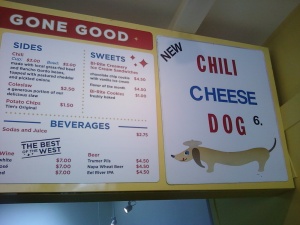 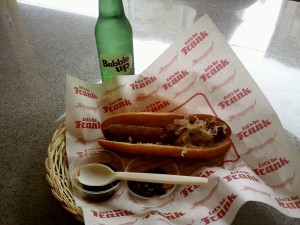 our groupon package of let's be frank dogs